A pollution near miss

On Wednesday 4th March 2015 with our new season just eleven days off, the Devon and a very lucky driver had an extremely close call. 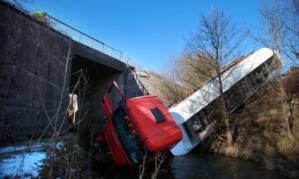 In the early hours an articulated fuel tanker came off the A977 at Powmill and ended up in the Gairney Burn which is one of our most important spawning burns. The driver suffered head injuries, but thankfully is reported as being stable in hospital.

The good news for the Devon was the tanker was empty and I understand that a fuel spill contractor attended the scene to deal with any spillage from the tanker or from the tractor unit along with SEPA officers.

To the best of my knowledge serious pollution was avoided.

The A977 is a key route for fuel distribution from Grangemouth and has had a number of serious crashes involving fuel tankers between Forestmill and Drum. It is sobering to think what might have happened had the tanker been loaded (the embankment has no barriers and is protected by wooden fences)

This entry was posted in DAA News, River journal, Uncategorized. Bookmark the permalink.