The trout season closed on Tuesday 6th October, despite a weekend of rain, with a river in bare bone condition.

Its been a good season for the trout anglers, the wet winter, spring and early summer ensured the river ran at decent flow for two thirds of the season. As the prolonged dry conditions in late August and September persisted and the river relied on compensation flows, it is fair to say the fishing became a little more difficult but decent fish were still being landed and mostly returned.

My final trout of the season, no monster but decent sport on a 8′ 4# rod

With only seven days of the migratory season left, we really are now praying for sustained rain to draw at least a few fresh fish into the river before the season closes. Friday night’s rain managed to lift the river at Glenochil nearly 20cm but that is only 20cm barely above the river’s all time low level!

On a much more promising note the River Forth Fisheries Trust work have now completed their improvements to the weir at Dollar. The local construction company Marshalls took advantage of the low water levels in September to complete the works of lifting the depth of flow in the pass which will hopefully improve the passage of Salmon and Trout in all conditions

Colin Smail has provided a nice pair of photos which show quite nicely the improvements the first taken in typical river flows:

The latter taken on completion of the works where the main flow is being directed through the fish pass:

In addition the Ochils Landscape Partnership (in which the DAA are represented) have completed bank stabilisation works around Lynbank. Alan Armstrong’s photographs illustrate the improvements but also the exceptionally low level of the river in mid October. 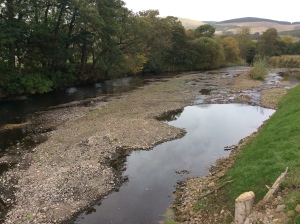 At the same time the Ochils Landscape Partnership have been completing improvements for fish passage on the step weir formed below the former Devon Valley Railway on Dollar Burn. We anticipate that this will further improve an already important spawning burn.

We are hoping that that there may be an opportunity to undertake some bank stabilisation works at the oak woods down stream of the Haugh in partnership with the Ochils Landscape Partnership. During the close season we will be exploring the potential of opening up a potential spawning burn on the Fossoway beats.

This entry was posted in DAA News, River fishing, River journal. Bookmark the permalink.
%d bloggers like this: