After a series of minor spate events caused very heavy localised cloud bursts during last week the heavens really opened on Friday. In no time, the Devon at Castlehill reservoir had risen over a metre: 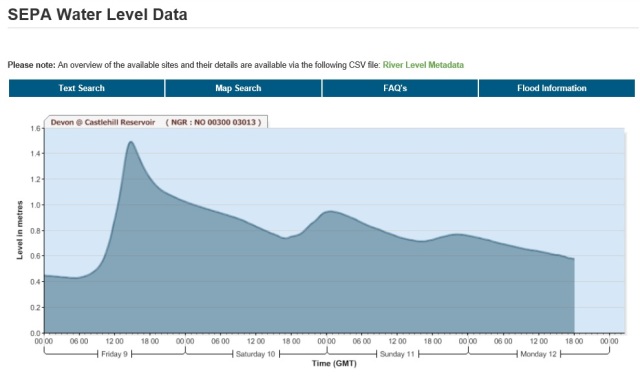 As is its fashion the gauge at Glenochil showed a much slower rise but peaking with extra 1.25m of flow: 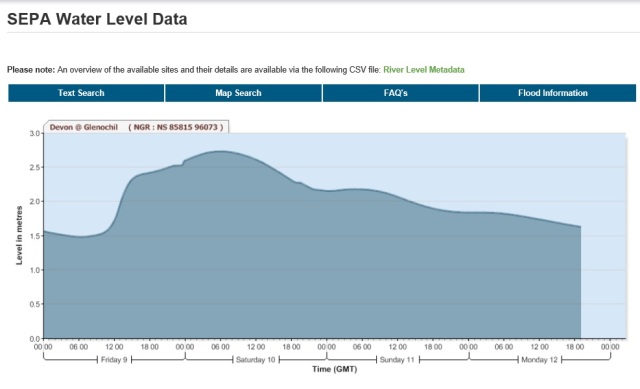 This left the river the colour of a late, dangerously high and completely unfishable.

To date no significant migratory fish had been caught but judging by the number of cars parked at Vicars Bridge this evening a concerted effort has been put in, as surely some fish  must have come in to the river? It will be interesting to hear about any catches or even sightings!

The river has been fishing well with reports on facebook of a very large brown trout caught by angler bait fishing. These big fish do succumb often to worms  and I for one think there are quite a few lurking about (you only need to see some of the big brownies trying to get over Dollar Weir when there is a spate at the backend). Fly fishing has produced a lot of good fish in the 1/2lb to 2lb bracket and prodigious quantities of salmon and trout parr.

A number of anglers have pointed to incredible of  stands of weed (I stand to be corrected but I think this is Ranunculus  other wise known as Water-crowfoot) on the Fossoway Beats. This is posing difficulties for anglers with wets and nymphs, but real opportunities for the dry fly angler. The weed has always been there, but in recent years has been suppressed by silting caused by prolonged flows of compensation water. This summers regular series of spates has allowed the weed to flourish. Anglers may curse it but it does provide cover for fish and supports large populations of invertebrates .

The Glenquey permit draw for catch returns submitted in June went to angler from Alloa and in July an angler from Burntisland.

In other news we are busy working with Forth Rivers Trust, other associations/clubs and propitiators on a new initiative to promote fishing throughout the Forth catchment. We continue to badger Clackmannanshire Council and SEPA about fly-tipping that has occurred at Marchglen and Vicars Bridge (included the load of spent tyres dumped by the side of the road between Vicars Bridge and Blairingone at the weekend)

Work parties have suffered through a combination of well earned vacations, injuries and the crazy rate of vegetation growth this year. The boys will no doubt be out on Wednesday clearing debris from this weekends spate!