River and Glenquey update – almost the end of the season

With only one more sea trout/salmon fishing day to go, the Devon Angling Association 2016 is almost over.

The end of the Glenquey season this year was extended from its traditional 30th September finish to the statutory end date of the 6th October. A number of anglers took advantage and were still catching:

A late 2016 season brownie from Glenquey [caught by Alan Graham]

Catch returns for September and up to the 6th October showed 37 anglers submitting catch returns showing they caught 145 trout at average 0.65lb and each angler catching a mean 3.9 trout/visit.

We very much appreciate the time taken by anglers in posting their catch returns to the box  and we extend our thanks particularly as this season we have had 328 catch returns  compared with 263 in 2015.

Brown trout fishing on the river came to end on Thursday 6th October and was met with cold gusty easterly winds. I shared the Fossoway beat with a single other angler for a difficult afternoon of fishing. I lost a decent fish, frustratingly almost at the net, but at least didn’t blank as I managed a few wee trout on a parachute adams

Fishing wasn’t the greatest but the scenery made up for it! 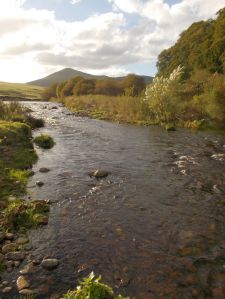 A couple of moderate spates, combined with high tides have brought salmon and sea trout into the river in the last few weeks. Apart from the illegal caught salmon from Taits Tomb reported in September I am aware of only one Salmon being reported caught (though I am confident that a few of the river’s more canny anglers will have had success ……. we will find out in the newt couple of weeks as catch returns come in). Interestingly we have had several reports of Sea Trout being caught: 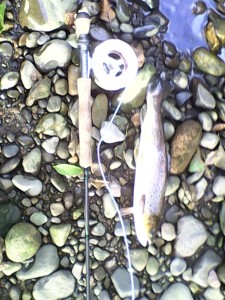 Significantly sea trout were seen running on Thursday, where Alan Graham caught two and lost another very fresh fish; yet when I fished the same area on Friday I drew a complete blank (nothing surprising there).  Now I could (and should) blame my lack of angling skill but there was a significant difference between the two days and is a new phenomenon on the Devon.

This year Scottish Water have began generating hydro-electric power at Castlehill Reservoir. When generating they are releasing significantly more water than the standard compensation flows. This is the SEPA gauge reading from yesterday:

By the time I was fishing on Friday afternoon the flow from the headwaters had reduced as they had stopped generating during Thursday afternoon and didn’t resume until Friday afternoon. Time will tell as to the impact on the fishery of this generation activity? There are a lot of factors at play:

No doubt anglers will be out in hope rather than expectation on Monday to bring the season to a close ………. hopefully at least one angler will get lucky!