In time honoured fashion just as my delphiniums come into bloom ……… the weather breaks resulting in them being flattened by the incessant rain and wind. There has been a wee bit of discussion here and on Facebook what condition the river will be in over the next couple of days so I though it might be interesting to illustrate the impact of water abstraction on our water.

According to the SEPA rain gauges, in the last 36hours up to 9pm  37.2 mm of rain was recorded in Drum (Crook of Devon), 26.6mm in Tillicoultry, 48.4mm at Balado and 42.6mm at Kinkell Bridge (on the other side of the Ochils). On most rivers this would result in a big clearing spate but not necessarily so on the Devon.

It is worth looking at the SEPA river level gauges on the Devon and compare with some of our neighbours using some screen grabs from earlier in the evening, firstly the lower river at Glenochil: 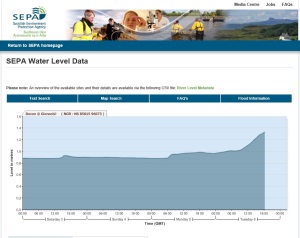 The gauge on the lower river was showing a steady rise in river level to about a foot (and is still rising when I last checked). Now the gauge downstream of Castlehill Reservoir

Despite at least an inch of rain the change of level is measured in millimetres.

Now compare these with two other Ochils related SEPA gauges, firstly the Allan Water at Kinbuck:

and the North Quiech at Lathro, near Milnathort (a major feeder burn of Loch Leven): 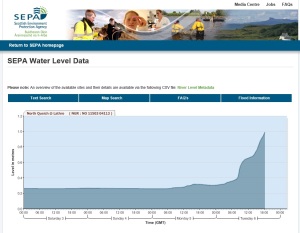 Both the Allan Water and the North Quiech have much quicker responses to rainfall and generate much larger spates despite having very similar catchments. The explanation of the difference is of course simple.

The headwaters of the river are effectively impounded by Castlehill Reservoir. It acts as a strategic reserve (it has to be pumped to the Glendevon WTW, while all the other reservoirs deliver water for treatment by gravity). I guess during the prolonged dry spell water is held in the upper reservoirs while Scottish Water draw down Castlehill to maintain their legal obligation to provide compensation flows to the river.   Anyone passing Castlehill Reservoir will realise just how low the water level is (I understand that they have had to suspend fishing there for moment). It will take a lot of rainfall to fill the reservoir to a level where it will be discharging over the spillways to increase the flows above compensation flow.

One of the unusual feature of the Devon below Castlehill is that there are very few feeder burns of note until the Gairney Burn is reached below the Cauldron Linn (there is the Glendey Burn in Dunning Glen, the Thorney Burn which joins the mill lade at Crook of Devon and a wee burn at the top of Rumbling Bridge). Most of the drainage from surrounding fields is lost to groundwater flows (including part of the compensation flow) to reappear in the river away downstream. At these times spates in the lower river  are much less significant then on surrounding waters as the additional water is generated by flows from the Gairney and the main Hillfoot burns only.

The impact of abstraction therefore has a significant impact on the river basin:

So I can predict that below the Cauldron Linn tomorrow there will be a decent spate and the river will pretty dirty. I think with the continuing heavy rain overnight the Glendey Burn, field drains and groundwater will raise the upper river above the Cauldron Linn a good deal, clearing the accumulated sediment quickly ……… fishable possibly but if I had to fish tomorrow I would head to Glenquey!

Will this bring some Slob or  Sea Trout into the river?

This entry was posted in River fishing, River journal. Bookmark the permalink.