September 2019 update – Part 3 – Working with the Forth River Trust

One of the important tasks that members of the DAA committee undertake is supporting the Forth River Trust’s biologist undertaking their routine surveys of the River Devon.

You may have seen Keith Broomfield’s excellent nature related articles in The Courier and Alloa Advertiser which frequently feature the Devon, Strathdevon, the Ochils and Glendevon. He is also an excellent twitter feed featuring many of his amazing wildlife photos:

Keith in recent weeks has published two articles about these surveys which I am simply going to quote from and use a few of his photos!

With an air of excitement, we empty the contents of our small river sampling net into an inspection tray and stare in wonderment at the multitude of wriggling invertebrates suddenly revealed.

Accompanied by Alan Graham and Bob Wright of the Devon Angling Association, and under the watchful eye of Amy Fergusson and Kyle Hind of the Forth Rivers Trust, we had just been ‘kick sampling’ to determine the abundance and variety of invertebrates on a stretch of the River Devon in Clackmannanshire.

The technique involves kicking the stony riverbed with wader-clad feet, and then catching in a net any invertebrates stirred-up into the water. This sampling exercise was a trial run by the angling association with a view to becoming part  of the national Anglers’ Riverfly Monitoring Initiative to provide data on the health of our rivers.

In our examination tray there are numerous mayfly, caddisfly and stonefly larvae, as well as tiny freshwater shrimps. These invertebrates are the engine room of the river, the driving force that supports everything else – food for birds, fish and so much else. They provide many other ecological benefits, too, including the recycling of nutrients.

One way of monitoring fish populations, especially juveniles, is electro-fishing – a specialist technique that temporarily stuns the fish, enabling them to be scooped-up into a net before being later released unharmed back into the river.

As such, I was delighted to have been invited by FRT to participate in an electro-fishing session on the Dollar Burn. Headed-up by Jo Girvan, the team consisted of Jack Wootton, who also works for the Trust, volunteer Bethany Robinson and Colin Smail of the Devon Angling Association.

The Dollar Burn, along with Alva, Menstrie and Tillicoultry burns are regularly monitored by the Trust to assess how fish populations are faring and also to detect any trends.

Jo slowly wades slowly upstream, sweeping an anode into the water ahead of her. Jack is right behind and he quickly lifts up into his net any fish affected by the electrical current, which are then gently placed into a pail of water. Fish that are missed, recover within seconds and dart back to the bottom of the burn. 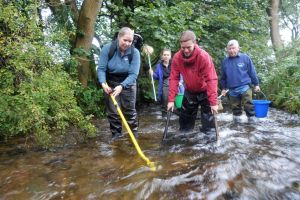 After a carefully timed sampling period, we return to the bankside and examine the live-catch. Jo is pretty satisfied with the result, with 39 young trout and six small salmon caught. The good number of one-year-old trout is especially encouraging, as it indicates that the most recent spawning season was relatively successful. 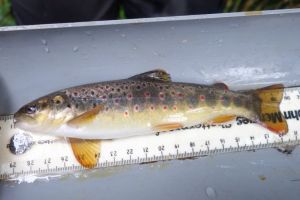 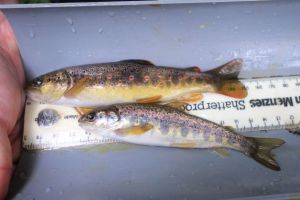 We also caught an eel, which caused a bit of excitement, as their numbers have plummeted alarmingly in Europe over the last few decades. This eel will stay in this burn for a few more years yet before embarking upon an epic migration to the Sargasso Sea off America to spawn.

Juvenile eel from the Dollar Burn