Season 2020 closed on Saturday 31st October and I think it would be fair to suggest it will be a fishing season etched on our memories like no other.

Beyond the national shutdown in response to Covid-19 between late March and end of May, the impact of the pandemic continues to impact the work of the Devon Angling Association. The Scottish Governments post-lockdown restrictions and the needs of individuals to self-isolate, has meant a much reduced scale of work has been able to be undertaken.

Under the current guidance we have decided it would be prudent to cancel the 2020 Annual General Meeting. In early January we will publish the secretary’s report on the website which will summarise the 2020 season in detail and any other pertinent information. Work is already in hand to prepare for the 2021 season.

So how did the end of the season pan out?

The obvious thing to say is that it was wet and at times very wet!

The prolonged rain through August and September ensured that Glenquey pretty much remained full, ensuring most angling was undertaken from the south bank. In August 43 anglers submitted a catch return recording a modest 60 fish [0.6lb mean and 1.4 trout/angler]. In the last five weeks of the season the trout were far more co-operative with 57 catch returns recording 167 fish [0.6lb mean and 2.9 trout/angler]. It is difficult to judge the full impact of Covid-19 on Glenquey but it would appear to have had a marked increase in angling effort after lockdown compared to a typical season. It is disappointing that only 54% of tickets issued return a catch return. The catch returns provide the DAA with key information about the health of the fish population in the reservoir. To hopefully improve the level of submitted catch returns we will endeavor to either move the box closer to the car park or install a second box adjacent to the car park.

The Devon had a number of major spates and throughout August and September, with a major storm event on the 12th August. This resulted in the usual redistribution of detritus along the river and caused a few landslips and tree falls, such as this recorded by visiting angler Mark Coutts and his pal, away above Rumbling Bridge in the Devon Gorge:

It certainly had not effected the trout fishing as the pair managed to land approximately 40 trout, of which this was typical:

The late season fishing between spates was very good indeed. A number of large fish, in excess of 1lb were caught by all methods. I spent a bit of time watching for salmon leaping at Dollar Weir in late September, and was once again astonished to see the size of some of the mature Brown Trout heading upstream. Impossible to know how many but there were Brown Trout well in excess of 4lb. Increasingly we see upstream nymphing successfully deployed on the Devon, it takes a bit of time to master but in the rights hands can produce spectacular results. Good fish were found along the whole length of our water, including this wee gem caught by Jakob Monk at Dollar: 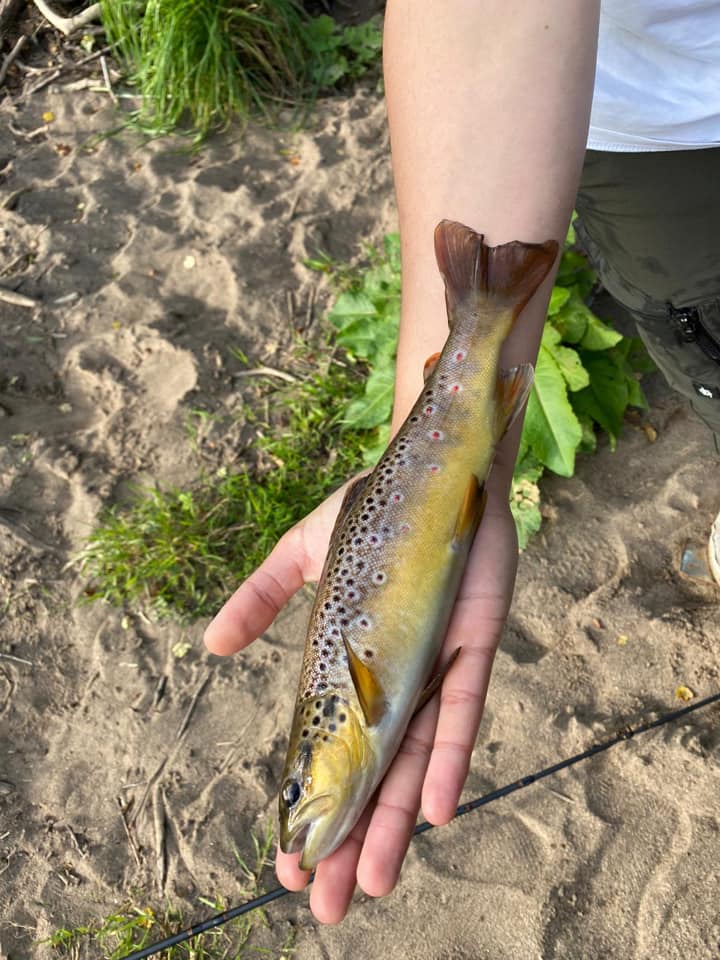 The big spates brought a lot of Salmon into the river, but they proved quite allusive.  In the end a total of 26 salmon were caught and returned, with Colin Smail proving to be the most successful angler with a total of 5. Ross Haldane caught what appeared to be a very large fish in mid September. A total of 13 Sea Trout were caught and Alan Graham proved to be the champion for Sea Trout catching 9 of the 13. It was a strange season as there clearly a lot of Salmon in the river, I managed four trips where I had at least one proper hook up (you know its Salmon within a couple of seconds of a tug) without even seeing the fish. Then on my penultimate trip I had a mad twenty minutes were I was able to catch a 7lb cock Salmon, then a 4lb hen Salmon before finally managing to snap my rod tip bringing the session to a premature end ……… comfortably the best day of my season. The cock Salmon

On behalf of the DAA can I wish all our members and friends a very happy Christmas with your families and a safe and prosperous 2021!

1 Response to Belated end of Season 2020