The prolonged drought may be coming to an end (hopefully) but the river remains steadfastly at a very low level. Castlehill Reservoir has a huge, mostly negative, impact on the river but at these times the compensation flow keeps the river in reasonable condition. It will take a lot of rain to get a meaningful clearing spate, hopefully in time for the salmon run.

Despite a couple of poor salmon seasons the river appears to be stuffed with salmon and trout parr. I spent a pleasant evening on Saturday fishing dry flies downstream of Rackmill. 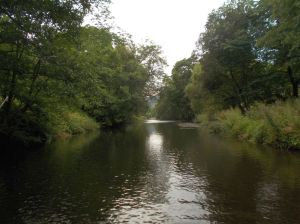 I managed to loose two decent fish, frustrating but the multitude of parr attacking the fly more than made up for it. I was catching salmon and trout parr in equal numbers! 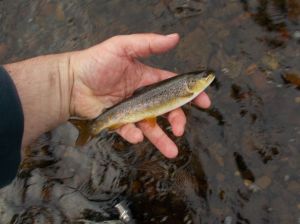 The thin water has made fishing challenging but there is a reputable report of a fish of 4 to 5lb been caught on the river.

Up at Glenquey the water levels have dropped significantly opening up access to most of the north bank (ironically not long after the work party had spent time clearing up the shrubbery). Caution should be taken crossing the second burn along for the dam.

Various works have been done by the work parties, particularly the endless toil of clearing vegetation to keep access to the river open. A couple of the committee have also been busy kick sampling to identify the state of health of the invertebrate population. This is a tool which will be used to investigate potential problems on the river for example if the ochre entering the river from Mine Treatment at Vicars Bridge is impacting invertebrates. First surveys above and below Vicars Bridge were very encouraging (Stonefly nymphs, damsels, midge, caddis , leaches and freshwater shrimp were identified.

A serious outbreak of Giant Hogweed has been identified near the river and has been reported to SEPA, SHN and Clackmannanshire Council. Please watch out for any emergent plants anywhere on the river or surroundings particularly in Menstrie to Alva area; if you spot a stand avoid all contact and get in touch with the DAA (and SEPA, SHN and Clackmannanshire Council). We are extremely anxious to avoid this nasty pernicious plant taking hold on the river

The DAA was delighted to receive a donation of £1000 from EPIC [Enabling Projects in Clackmannanshire] which is ring-fenced. Half the sum will allow the DAA to now support two local primary school with the ‘Fish in the Classroom’ project  and the other is to be used for equipment for clearing paths and accesses along the river corridor. We are extremely grateful for the support of EPIC.

Hopefully by the time the next update arrives the river will be full of water, hungry trout getting full ready for spawning and maybe even some Salmon!